Time to break the rules of #FilmChallenge and share the ten films I picked and why I picked ’em. You can’t tell me what to do, Zuckerberg!

Facebook’s algorithm (and my friends) put the FilmChallenge right in my face for the second time. And since I like to talk about myself AND movies I like (in that order), I’m gonna expand on them here.

Before we start: I did do the #FilmChallenge last year, but I picked a bunch of old and/or obvious movies. So I tried to either pick new movies that had impacted me, or movies I maybe don’t talk about so much.

Now, we begin our countdown, in no particular order but how I randomly posted them.

These aren’t necessarily my favorite movies, just a list of a few that got me.

So, what have I been up to lately? This:

I just plowed through the entire Dark Tower series by Stephen King for the second time, and I have some shocking and terrible news for you: it’s still incredible. I first started reading the series when I was around 15 years old, and was forced to wait painfully for the last four books to come out.

Being able to read them all back-to-back provided a slightly different experience. But, overall, yeah. I think it’s still my favorite book series of all time. It’s so epic and surreal and strange, with a truly unique world (well, worlds) that feel 100% real. Even the weirder meta elements in the last few books work really well for me.

END_OF_DOCUMENT_TOKEN_TO_BE_REPLACED

Unfortunately, just because a theory sounds cool, doesn’t mean it holds any weight, much like how the tiny hands of a cyborg velociraptor have difficulty holding weight. Here’s three AMAZING theories that are completely bullshit, ranked from least bullshit to most bullshit.

END_OF_DOCUMENT_TOKEN_TO_BE_REPLACED

I’m a big fan of the five-act structure for stories, namely because of this fabulously insightful article from Film Critic Hulk.

Anyway, I was watching “The Little Mermaid” this weekend because I’m an adult grown-ass man and I can watch mermaids if I want to.  I realized that “Little Mermaid” has one of the more perfect examples of a five-act structure I’ve ever seen.

All that’s important for an act is that it tell a story, and it ends as soon as the story “can’t go back anymore.” Basically, if a character choice makes the world a different place, the act is over.

Normal “Ariel-has-ADD” stuff. She’s bad with social calendars, she longs for the surface world, but it’s not much more than a hobby at this point. However, she finally stops fantasizing and goes up to the surface world. She chooses to save Eric from the ship wreck, and then she falls in love with him. Basically, she can’t “go back.” She’s a 16-year-old girl and she’s not just going to forget that she’s fallen in love. 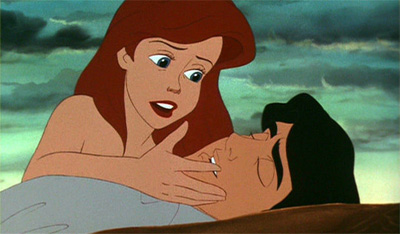 King Triton starts to suspect Ariel is up to trouble, and Sebastian does the dirt-digging. They discover her treasure trove, blow up her statue, and generally follow the “How to Make My Teenage Daughter Rebel” handbook to the letter. In despair, Ariel goes to the Seawitch and trades her voice to become human. Now she physically cannot go back. Oh, and her soul is on the line.

Pretty much all the stuff with Ariel as a human trying to woo Eric and learning things about the surface world. This act has one of the more obvious endings in the entire movie – the act ends the SECOND sexy-human Ursula shows up, singing on the beach. The Eric-wooing is now impossible, and Ariel is going to lose her soul. End of act 3.

Act 4 is traditionally where everything goes to hell and the bad guys are going to win. “The Little Mermaid” pulls this off fantastically, and economically. Eric is entranced with Sexy-Ursula, and is going to marry her. The wedding ship sails, and Ariel is stuck on land.

Ariel and her buddies try to stop the wedding, which they do, but the wedding doesn’t really matter to begin with – it’s a stall by Ursula, and they run out of time. Ariel turns back into a mermaid, she’s going to lose her soul, Eric is lost forever, and Ursula wins. Just when things couldn’t possibly get worse, Triton shows up and offers to trade his soul for Ariel’s – the choice is made, and we can’t go back in the story (on multiple fronts).

The climax, basically.  Ursula takes Triton’s soul, his crown, and his trident and becomes your basic Cthulhu sea-god. She’s cackling, making storms, generally being a dick, and is going to kill Eric and Ariel. Eric instead decides to go hardcore metal and rams a ship spar right through Ursula’s giant body.

Ursula dies, all the contracts get voided, everyone is happy. You’ll notice the movie doesn’t end here, because the characters haven’t made a choice, and the story is essentially reset back to the second act. Except, this time, Triton has learned something about himself during his sacrifice. And, of course, Ariel’s commitment and Eric’s bravery (and being a total badass).

So, Triton makes the choice that ends the movie – he lets go of Ariel, turns her into a human, and gives the happy couple his blessing. Now no one can go back to how things were, and the act (and the movie) is over.

That’s why “The Little Mermaid” feels so fast-paced, and why it works so well as a movie – the characters are constantly making decisions that change their lives. Big decisions, too, that turn the entire plot on its head.

Also, and this is just a fun thing to think about, it could be argued that King Triton is the main character. He’s the character who changes the most, goes through the biggest journey. Sure, Ariel is a human now and has a husband, but her basic character is identical. Eric is handsome and brave throughout. Triton reverses his entire thinking over the course of the movie, plus, he makes the decisions that end Act 4 and Act 5.

Anyway, if your story and plot aren’t making sense, try to think of everything in acts, ie, decisions that close a door on the past. Five acts is great to keep the pace fast, but any amount of acts work as long as the characters are making the decisions. Fight scenes,sex scenes, and car chases are awesome, but that’s not why people watch movies and read books. They want to see characters change, but more importantly, they want the characters to make the big scary decisions that make the plot happen.

Sometimes Everything Goes to Hell, and You Have to Create

Every musician on Earth knows it – being eviscerated is the best song-writing fuel there is. Nothing makes you pour your heart into art like having it ripped out of your body and pureed. Fortunately for all of us not on the receiving end of said pain, we get to enjoy the badass art that’s birthed by human agony. Scottish sorcerer (and occasional writer) Grant Morrison wrote “All Star Superman” because his dad had just died. Edgar Allen Poe’s entire body of work cataloged the agony of losing the one you love at an early age. Sylvia Plath’s “The Bell Jar” is essentially a novel-length suicide note.

There’s a catharsis factor to creating art (a book, a movie, or a pornographic comic about Alice in Wonderland coughAlanMoorecough). The world weary artist gets to scream into the void all their fears and frustrations. They get to pour alcohol on their wounds in full view of the public. They get to suck the poison out of the snakebite that is their life. Plus, you know, sometimes they get paid for it and that’s nice.

This list could go on infinitely, but here are four classic movies that we only got to see because someone’s life exploded, and they decided to point a camera at it.

Interview with the Vampire

Anne Rice, famous writer and semi-notorious kook, is basically responsible for the modern resurgence of the vampire craze. Some consider this to be a bad thing, but I don’t – for me, “Vampire Story” is just another genre like “Science Fiction,” “Musical,” or “Madonna Movie.” Her first novel of the “Vampire Chronicles” was “Interview with the Vampire,” a sweeping, romantic, gothic tale of vampire-with-a-soul Louis and his creator, the rock-and-rolling, smooth-as-a-gravy-sandwich Lestat. Themes of innocence lost, homoeroticism, and morality play out against a lush backdrop of pre-Civil War New Orleans. It’s good book, if you can wade through a metric fuck-ton of meandering description, and Hollywood made it into a surprisingly great movie starring angel look-alike Brad Pitt and an almost unrecognizable Tom Cruise. Antonio Banderas also makes an appearance, because apparently the filmmakers decided to break the record for “amount of lady-boners caused by one movie.”

Nope, not dead yet.